Rep. Seth Berry is House Chair of the Maine Legislature’s Joint Standing Committee on Energy, Utilities and Technology, where he works to improve Mainers’ access to affordable clean energy and high-speed internet.  He is also Vice President for Business Development of Kennebec River Biosciences, a Maine-owned biotech lab in Richmond working to improve the health and sustainability of aquatic farms and fisheries worldwide.

Seth is serving his twelfth year in the Maine Legislature. He has previously served as House Majority Leader, Assistant Majority Leader, House Chair of the Committee on Maine’s Workforce and Economic Future, and ranking Democrat on the Taxation Committee. He proudly represents the communities of Bowdoin, Bowdoinham, and Richmond, as well as the historic community of Swan Island.

Prior to his legislative service and career in business, Berry earned a BA from Brown University and an MA from Columbia University, where a combination of scholarships and work-study jobs made his attendance possible.  He then spent the 1990s teaching in inner-city New York.  In 1999 he won the Hexter Award for Excellence in Teaching from the Public Education Association, and his teaching was featured in New York City’s Best Middle Schools, published by Soho Press. In 2000 Seth and Adelaida moved back to his hometown of Bowdoinham, Maine, and he taught for eight more years in MSAD 75.  During those years Seth also taught graduate-level courses in education through universities in both New York and Maine.

Seth serves on a number of boards and advisory councils.  Among these are two early childhood organizations (one regional, the other statewide), as well as the Research Reinvestment Fund advisory board for the University of Maine System. He has served on the Maine Children’s Growth Council, and on the board of the Pineland Suzuki School.  For four years starting in 2002, Seth also served on the Bowdoinham Selectboard, including a year as Chair.

Seth and his wife Adelaida live in Bowdoinham with their two sons, where they enjoy raising their own food and cutting their own firewood. 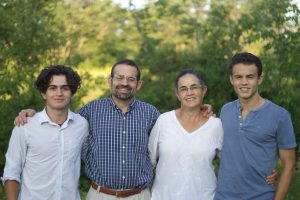