Giraffe Awards honor those who “stick out their necks for children” 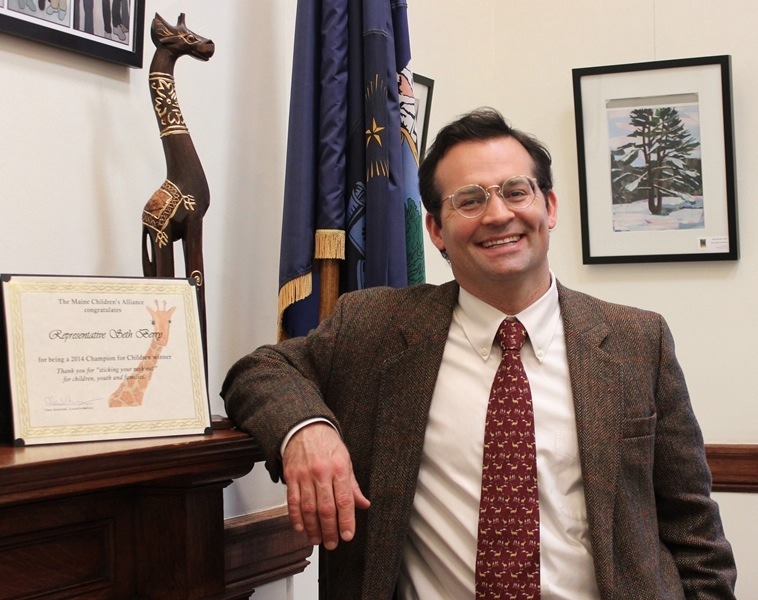 House Majority Leader Seth Berry in his office after winning a 2014 Champions for Children Giraffe Award from the Maine Children’s Alliance.

The Maine Children’s Alliance presented Berry the Director’s Award on Wednesday for his work on behalf of the state’s young people during his eight years in the state House of Representatives. Early childhood issues are among Berry’s top priorities as a lawmaker.

“It is a huge honor to accept this award. I’ve worked on a lot of issues in the Legislature, but early childhood is the issue closest to my heart,” said Berry, D-Bowdoinham, who was an award-winning public school teacher with experience in rural Maine and inner-city New York. “In their earliest years, the potential of children is almost boundless. Right now, we are losing maybe a third to a half of that potential before these kids ever begin school. But if we simply helped more kids get a strong start – if every Maine child was school ready and every school was child ready – we could transform Maine’s economy and transform our future.”

The Champions for Children Giraffe Awards are presented to individuals and organizations who are “sticking their necks out for children.” The 2014 honorees were selected for their tireless work against the many challenges to support and protect Maine’s children.

Advocates for children lauded Berry’s work in the Legislature.

“Seth has a passion for early childhood and early childhood programs and is a leader in Maine and at the Statehouse to gain greater support for all of these initiatives and programs,” Maine Children’s Trust Executive Director Jan Clarkin said in nominating Berry for the award. “He reaches out pro-actively to a wide variety of constituents on all of these issues. Seth truly wants to learn and understand as much as possible about early childhood issues and considers possible solutions.”

In his nominating letter, Peter Lindsay, director of the United Way of Mid Coast Maine’s Community Impact & Success By 6, praised Berry’s advocacy for young children, students and their families.

“Seth has provided strong leadership during budget discussions, advocating for continued or increased funding for Head Start, Early Head Start, Maine Families home visiting programs, child care subsidies, universal Pre-K, and for the range of preventive services within the Fund for Healthy Maine,” wrote Lindsay, who is also co-chair of the Maine Children’s Growth Council, on which Berry served. “Consistently, Seth has used national and Maine research to argue that the very best way for Maine to move forward economically is to have a robust, universal system of early education and family supports.”

Berry, who is in his fourth term, is leaving the House in December due to term limits. This year, he also received the Friend of Youth in Care Award, was named a Margaret Chase Smith Distinguished Maine Policy Fellow and was presented a resolution from Maine Conservation Voters recognizing his work to protect the environment. The Joint Select Committee on Maine’s Workforce and Economic Future, which Berry co-chairs, received the Maine Development Foundation President’s Award.

The Giraffe Awards were presented at an event at the Green Ladle, a Lewiston Regional Technical program focused on culinary arts.